5 Creative Tricks Popular in China and How to Use Them

Advertising in China is vastly different than anywhere else in the world. How can you reach this huge target audience and what kind of creatives work best? We spoke with the Mindworks creative team to find out more about this topic and how they do it.

Strong ad creatives can tell great stories and attract huge audiences. But what might perform well in the West won’t really work in China – in other words, you can’t use a “one-size-fits-all” approach. Not only that, but Chinese users’ habits really are different – from what they play, why they play, how much they spend on games, and more.

Advertisers looking to tap into the Chinese market need a China-specific strategy if they want to achieve success.

Of course, you know localization is extremely important. But how?

Our free report called Mobile Gamers in China is the perfect start if you want to get some background before we dive into details about this massive audience.

In order to reach peak advertising performance in China, what are the most effective creative “tricks” you should use to target Chinese users?

“Bullet screen” aka “bullet comments” is an incredibly popular feature in China, particularly with younger users. Users can add real-time comments to the videos or streams they’re watching and they fly across the screen very fast, like bullets basically.

When the comments from you and all others who are watching or have watched, are flying across the screen at the same time, you could have the whole screen covered – that’s a bullet screen. Bullet screens are so popular in fact, that some theaters in China have begun integrating them into their screenings, so viewers in attendance can talk about what they’re watching as they’re watching it.

By using this feature, ad creatives get a sense of community, as things like user ratings, feedback or comments can be incorporated into the ad in a way that is both seamless and relatable.

For example, the Mindworks team incorporated bullet comments into the ad creative to get the “bullet screen” effect: 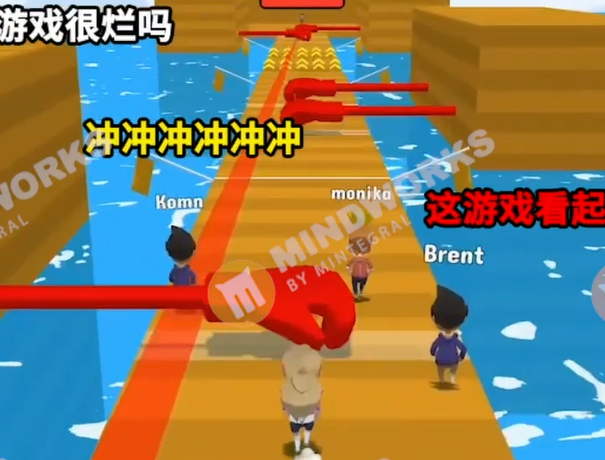 Bullet comments in action, overlayed over a piece of gameplay demo.
Game: “Touch the Wall” by Voodoo

Live-action videos are another effective way to creatively showcase a game or app in China. The concept is pretty straightforward: by using real people and have them interact with your product, you can get your target audience to form an emotional connection with the protagonist(s) and, subsequently, the product being advertised.

The live-action shots can either tell a good story with an interesting plot or just showcase a scene while users engage with the product in a positive or even passionate way. However, you still need to get the right balance between live-action shots and gameplay shots, to make sure you get the desired effect.

One more thing: remember that your creative needs to be relatable, so make sure you choose the right actors for your target audience!

Introducing highly localized elements into your creatives can reach very specific target audiences in specific regions. We all know playable ads are quickly becoming the next in terms of evolution, after static and video ads. They power-up your campaign by offering far better conversion and engagement rates.

Adding some localized elements into your playable ads can help you achieve this goal even further. For example, puzzle games tend to perform well with the older female population in China, so using that type of gameplay, combined with localized designs and background music, will result in a type of creative that’s highly effective at converting this segment of the population.

Sometimes it’s not about what you see, but what you hear that triggers a positive reaction: a catchy tune that stays with you even after you’re done watching something is extremely powerful. This concept has a name: the Earworm Effect.

In China, online advertisers need to pay attention to the background music they use and find ways to pair it with the actual visuals. Matching a catchy rhythm with a few gameplay shots can work incredibly well with the Chinese audience and it can make for extremely pleasant user experience. While the AR technology is relatively common in the West, this is something that has also managed to become extremely popular in China. In fact, according to ChinaDaily, it is expected that China will spend over $65 billion on VR/AR technology by 2023.

By using AR creatives, you can basically bring a game to life. Thanks to this unique mix of real-life elements and computer-generated graphics, you can really push the limits to what’s available in the creative space, and get the ideal emotional response from the audience in the specific regions you’re targeting. Augmented reality can take you into the heart of the action

Mindworks Can Make It Work

We know it’s hard to really reach the Chinese mobile users on an emotional level, and even though we want to share as many tips as possible with you, there are still many obstacles you need to overcome.

The good news is we are here to help: at Mintegral, we have our own in-house creative lab – Mindworks. Our extremely talented designers can create all these ad formats and more! Plus, their vast knowledge of the Chinese target audience means they will be able to convey the right message to the right people, in the right format.

If you’d like to talk to the Mindworks team about creative and advertising opportunities in China, we’re excited to announce that we will be at Game Connection in Paris on October 29th. Mindworks’ Creative Director, Stella Zhu, will be speaking there as part of our seminar series called the Mintegral Bridge Summit. The number of seats is limited though, so make sure you sign up now!