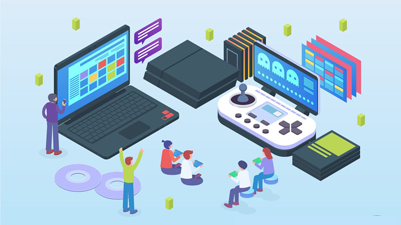 Keeping Your Head: A Beginner’s Guide To Header Bidding In Mobile Games

In this post, we’ll be talking all things 'header bidding' and 'ad mediation'. Not sure what these mean? Then you'll probably want to read on.

This article was originally published by Ioana Hreninciu, CEO at GameAnalytics.

Today we’re exploring the world of header bidding and ad monetization for mobile games. If that just made you say ‘huh?’, then this is the post for you.

We’ll go through the basics, the advantages and disadvantages, and demystify the acronyms and jargon that surround it. So the next time someone starts talking about eCPM or RTB, you’ll know what’s fluff and what’s truly significant for your studio.

It’s impossible to talk about ad mediation without using jargon and industry terms. So before we get started, take a look at this cheat sheet of words and phrases that you’re going to come across both in this post and elsewhere (it’s in alphabetical order).

Before we get into the ins and outs of header bidding, let’s set the foundation by starting with how ad mediation works.

Most mobile publishers have more ad inventory than they can sell through their own sales team or one ad network. To sell as much of this as they can, they work with lots of ad networks at the same time. As with any kind of transaction, some ad networks will bring in more cash for a publisher than others (for example because they specialize in a particular industry or area). That’s where ad mediation comes in. Publishers use it to match the right inventory to the right network, and get the most cash for their impressions.

Traditionally, ad mediation uses a selling process called ‘waterfalling’ or cascading their ad requests by offering the placement to one network at a time (see the jargon buster for more on how this works). But, this has one big disadvantage, and it all comes down to cold, hard cash.

The main problem with waterfalling is that publishers can lose money. That’s because they’re taking the first bid, rather than the highest bid.

Imagine that impressions are cupcakes (stay with me). You try to sell a tray of these delicious cakes to your favorite shop, which says thanks-but-no-thanks. So you lower the price and move on to your second favorite shop, which also says no. Then you lower it again and move to your third favorite… and so on. You’re going to get a sale eventually, because those cakes are getting cheaper every time you get rejected. But you don’t have to be a Great British Bake-Off winner to realize this isn’t the way to get the best price – what if your fifth favorite shop loves your cupcakes? They would have been willing to pay a higher price had you gone to them first. But waterfalling means you’ve missed out on it.

This is where header bidding comes in.

Almost the exact opposite of waterfalling, header bidding means that impressions are all auctioned off at the same time. All the advertisers get first look at every impression and bid for them simultaneously – so they only get them if the price is right for the publisher.

The name itself is slightly misleading as it’s referring to webpage headers – in a browser, the header tag on a web page lets ad networks and exchanges know there are ads available and asks them to bid for them. Obviously, mobile games and apps don’t have these. But over time ‘header bidding’ has become a catch-all term for any process that gets simultaneous bids from multiple advertisers.

Why is header bidding better?

For publishers, header bidding means they can accept the highest bid for their ad inventory – not the first. To go back to our baked goods analogy again, all the shops get to decide if they want to buy your cupcakes at the same time. You get the best price for them, and none of the buyers feel like they’re getting low-quality products. And for advertisers, it offers more transparency as they can see exactly how much impressions are worth. Everyone’s a winner. Or are they…?

As always, it’s not all good news. Header bidding in browsers means that pages can take longer to load, which obviously has an impact on users’ experience. The same goes for mobile games – building header bidding into these is an extra step that can slow things down, especially when they’re running on mobile data. And in-app header bidding is still in its infancy – at the moment there’s no one-size-fits-all solution.

The most likely outcome is that the two will continue to co-exist. Waterfalling lets publishers agree to exclusive deals with networks – where those networks get priority for certain ad placements. This allows networks to access specific inventory they may desire for their clients, and it also helps publishers charge a premium for their best inventory.

As a result, publishers may end up having a more “compressed” waterfall, which includes a network that has exclusive first access to a placement, with everything that doesn’t get acquired this way auctioned out to all networks.

It’s a ‘best of both worlds’ approach that gives both publishers and networks the ability to pick the partners most suited to them, while also earning more from their content.

So what should take away from this?

At the end of the day, in-app header bidding is good news for publishers’ bank balances, but the technology is still developing. Until it becomes the standard, game publishers who want to experiment with header bidding will have to find a balance between increasing revenue while maintaining game performance and responsiveness.