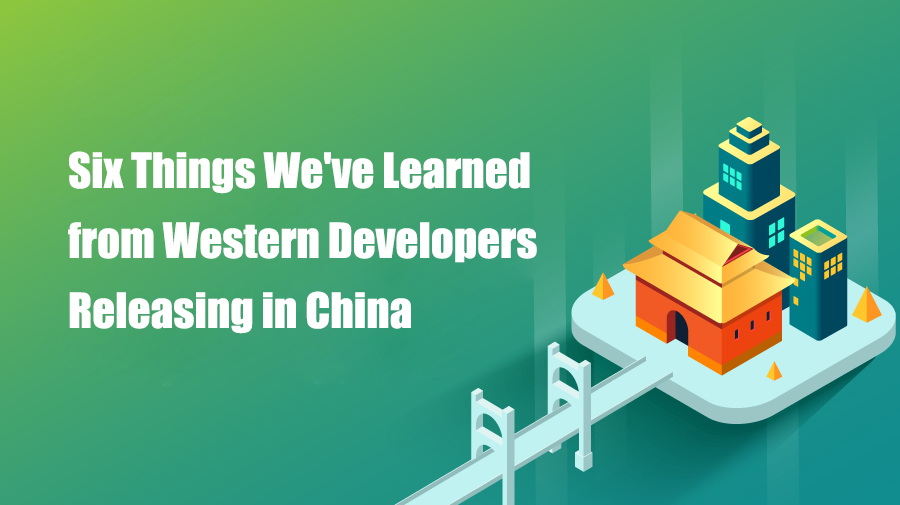 What’s it like to release a game in China if you’re a Western developer or working with a Western brand? Here are the highlights from our report for you to read.

What’s it like to release a game in China if you’re a Western developer or working with a Western brand? We’ve spent the past few months talking to people who’ve done just that.

We interviewed  14 mobile game developers and publishers with a range of business models about what it’s like to release in China. Experts from Miniclip, Tamalaki, Jagex, JoyPac, Perchange and plenty more provided answers based on their experiences.

Our report, From WEST To EAST, covers our findings in much more detail and it’s well worth a full read.

But, for those of you short on time, here are the highlights.

China is a popular market for the simple reason that it is “the biggest mobile game market out there”, as Cassia Curran puts it, Jagex’s head of business development and former NetEase employee.

Newzoo claimed that China has 615.9 million consumers spending $23 billion on mobile games. Numbers that staggering spread fast and have made small as well as large western studios curious.

However entering China does have its difficulties, leaving some Western developers deliberating at the sidelines.

They are curious about “such a big market, so full of opportunities”, states Martine Spaans, founder of publisher Tamalaki and spin off company FGL. But the extent to which they’re willing to exploit it is dependent on a number of factors.

The first major factor discouraging companies from releasing in China is the belief that regulation makes it a hard market to enter.

All games released in China technically have to be vetted by the government prior to release. Although there is a grey market in existence, which mobile games regularly find their way on to, the process of registering for an ISBN and having a game manually vetted by Chinese officials causes headaches and delays.

This was exacerbated by the lengthy game release freeze of 2018, which further bunged the pipeline up.

As a result, “games that were licenced over two years ago, some of them are yet to reach the market now,” said Tom van Dam, who worked for NetEase at the time of interview.

Overcoming this regulatory hurdle is therefore one of the major ways that Chinese partners can help Western businesses to thrive in the market.

There is, however, an easy way into the Chinese market. On the App Store you simply have to tick a box to release your game into the Chinese app store. A lot of developers wishing to test the waters or push a premium mobile game into the market opt for this method, which we have dubbed as “set and forget”.

It does still require effort to do so. You will still need to localise your game to suit the Chinese market, with much of the emphasis falling on localising for the local language.

But when compared to the process for Android – which we’ll come to in a moment – releasing on iOS in China works in a very similar way to the rest of the world. “Once you’ve done that [localisation] the process [for release] was pretty straightforward,” remarked Xavier Carrillo, CEO of Digital Legends.

Crucially, this method can deliver meaningful returns for companies. Apple’s seven per cent share of the Chinese handset market might seem small, but that translates into millions of users to tap into.

And despite most companies putting comparatively little effort into ‘set and forget’, many of our independent interviewees estimated that China became one of their five biggest markets upon the completion of localisation.

It may not be hugely sophisticated, but iOS can be a useful bridge to China.

In the West there are two markets to develop for: Apple’s App Store on iOS and Google Play on Android.

In China there are over 400 stores – Tencent My App, Huawei App Market, Oppo Software Store, 360 Mobile Assistant, Baidu Mobile Assistant, just to name a few of the most popular ones. And naturally, that fragmentation leads to plenty of challenges.

The first challenge is simply a technical one. Each store operates with a slightly different technical back end. This means a lot of work for developers.

“So literally just releasing your game and distributing it requires looking at all of those different stores, integrating the different SDKs for those stores that are around monetisation and the social side and sharing,” explains Allison Bilas, COO of JoyPac. “That’s the very technical side of getting your game out the door over there that becomes very complicated.”

Furthermore, there’s plenty of work for the rest of your team if you release across Android stores in China.

App Store Optimisation (ASO) becomes trickier in China because different stores use different size images for their assets. This means plenty of work for the design and marketing team.

And then there’s the challenge of picking which stores to deploy on. This includes trading off the potential size of certain stores against their demographic make-up.

In short, Android is where the majority of Chinese users are. But reaching them is nowhere near as simple as crossing Apple’s iOS bridge to an admittedly smaller group of players.

5) Finding a Chinese partner Western developers can trust is key

The challenges facing Western developers on Android is so significant that the only way you can really succeed is by finding a great local partner.

However, finding a trustworthy partner can be a challenge. The combination of China’s different user tastes, the challenges of intellectual property infringement in the territory and the different business culture makes it hard to find a company that matches yours.

It’s important to ensure you do though. With your partner likely to be responsible for integrating SDKs into your game to allow it to release on Chinese stores, you need to know that you can hand over your title to them with complete confidence.

“If you can’t trust that partner 100 per cent,” states Saad Choudri, Chief Commercial Officer at Miniclip, “if you’re worried about that partner looking at your code, redeveloping your game or something like that, then you shouldn’t even be looking at China.”

Finding a good match is possible. Tamalaki’s Martine Spaans found a great partner for the release of a hidden object game in the region. But finding that right partner requires research, plenty of business meetings at leading game conferences and time to get it right.

6) Only one genre doesn’t need localisation into China: hyper-casual

Everything else will need a lot of localisation. Chinese players have different expectations when it comes to design, art and monetisation models.

From changing the user interface to lengthening tutorials, adapting the design of the game is an important way to keep retention levels high. Art and story adjustments are also expected as Chinese consumers expect their entertainment to cater to their culture.

Monetisation models also need to be adapted to better suit the domestic market. The average Chinese player spends more often than global consumers while the highest spending players spend the most in the world. In order to maximise profits Western developers have developed live operations for the Chinese market, added more ads and offered custom bundles and subscription models for Chinese players.

So was it worth it releasing a game in China? It depends on the game.

The set and forget approach for iOS provided a high return on investment for developers wishing to experiment without the high barrier to entry. Those wishing to release on Android however have a tougher path ahead and must prioritise partnering with a Chinese publisher to make the journey smoother.

Releasing in China is not an easy ride to riches however with the right partner, it is possible to find success in the biggest market in the world.