South Korea is a mobile gaming haven — even for Western studios

South Korea is the fourth largest mobile game market in the world. Based on the research from Newzoo, we’ve taken a look at the South Korean scene to let you into one of the world’s thriving game industry cultures. Above: Team Korea during the grand finals of the Arena of Valor World Cup.
Image Credit: Tencent

South Korea is the fourth largest mobile game market in the world. More than half of South Korea’s population play games on their smartphones. They spent a total of $5.6 billion on mobile titles in 2018, according to market research firm Newzoo, which makes it a market all developers should enter.

But what is gaming culture like in South Korea? How has this influenced the kinds of games and game companies that have been formative to this culture — both in the past and now? And how does this help mobile companies to succeed? We’ve taken a look at the South Korean scene to let you into one of the world’s thriving game industry cultures.

Gaming has been a staple of South Korea for decades. Heading down to the local LAN game center, called “bangs,” after school is a hobby of many students and adults alike. Rows of gamers of all ages will sit at computers jacked up to super fast internet, playing games until two or three in the morning. Many internationally acclaimed esports stars started in these bangs in the streets of Seoul.

South Koreans love their MMOs, so it’s no surprise that League of Legends tops the list of the most played games. PUBG, Overwatch and FIFA Online also feature strongly. Even after 20 years the game that arguably created e-sports we know it — Starcraft: Brood War — is still going strong.

South Korea was the first country to host esports events two decades ago. They’ve been dedicating TV channels to competitive gaming long before the rest of the world knew what esports was. While the other countries were still talking about home consoles in 2000, Korea’s Ministry of Culture and Tourism sponsored the World Cyber Olympics alongside Samsung and Microsoft. It’s this forward-thinking attitude that also helped make South Korea a prime contender to become a mobile gaming powerhouse.

The launch of the smartphone and app stores benefitted territories that had the right combination of hardware makers, software developers, and internet infrastructure. South Korea was one of those countries. The strength of Samsung, the long success of companies like NCSoft, and the country’s willingness to invest early into developing internet infrastructure ensured it was well-placed to turn its wide range of gamers into mobile users.

According to Newzoo, Fifty-three percent of South Koreans play mobile games at least once a month. Mobile gaming is far more common than console (19%) or PC games (at 37%). 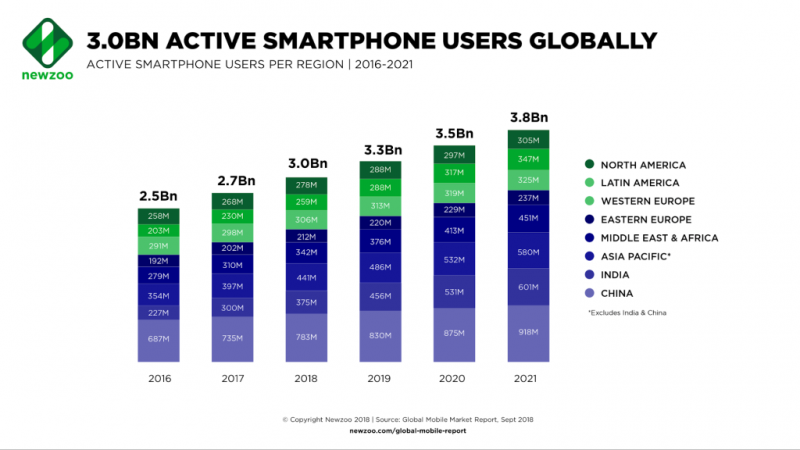 While other countries in Asia skew towards a young player base, the average South Korean mobile gamer tends to be adult, often with children. The largest subgroup of mobile gamers are 21-35 years old (19%) followed by 36-50 year olds (15%), according to Mintegral. More than anything, these figures are a testament to the high penetration rates and acceptance rates of mobile gaming culture in Korea across all ages. The South Korean mobile game market made $3.2 billion last year. Interestingly, the average revenue per paying gamer in South Korea is among the highest in the world, coming only second after Japan, according to Newzoo. Mintegral found that 40% of smartphone users spent money on mobile games in 2018. Often players spent this money on power-ups (41%), playable characters (38%) and cosmetics/skins (35%).

Which games are most successful? Role-playing games. An impressive 90% of all revenue made in mobile games came from this genre.

Often they come from existing IP, with the top 10 iOS games by revenues coming from popular franchises such as Lineage, Black Desert, Ragnarok, Three Kingdoms, and Marvel.

But there is also an appetite for casual games, with many of those succeeding through South Korea’s dominant messaging app KakaoTalk (which functions in part as a gaming platform).

When it comes to which companies stand out in South Korea, local publishers lead the market. More than 10% of all mobile games revenue made in the country came from Netmarble in the first half of 2018.

Games from foreign studios can still succeed in the South Korean. We see this with strategy games. Recently players have had a hunger for strategy games but there has been very little supply of them from local brands like Elex, NCSoft and Gravity, which have continued to focus on MMORPGs. However, international gaming companies have been able to step in and fulfill that need for players — suggesting that foreign companies can enter the sector successfully.

But if they’re to do so, it’s important to note that the South Korean market does have a number of regulatory challenges to overcome.

“Korea’s game industry is weighed down by government regulations, which have been undermining the competitiveness of local developers,” said Hwang Sung-ik, president of the Korea Mobile Game Association (KMGA), in an interview with The Korea Times. Regulations target loot boxes and aim to protect young players from excessive gaming by restricting gaming time.

This means it is important to design your game accordingly to ensure it can hit the market.

South Korea is a mobile gaming haven. There is a lot to gain from the country’s incredible infrastructure, deeply integrated games culture, and high penetration rates.

While local IP might be the preference for Korean gamers, there is plenty of room for western companies to jump into trending genres and find opportunity at the forefront of technical innovation.

But it’s important to make sure that your game complies with local regulations to ensure you can grab the opportunity in the Korean mobile gaming market.