Tapping into the Boom in Hyper-casual Games

Mobile Marketing talks to Erick Fang, CEO of Mintegral, about the rise and rise of hyper-casual mobile games in China, and how western developers can benefit from it.

Mobile Marketing talks to Erick Fang, CEO of Mintegral, about the rise and rise of hyper-casual mobile games in China, and how western developers can benefit from it. 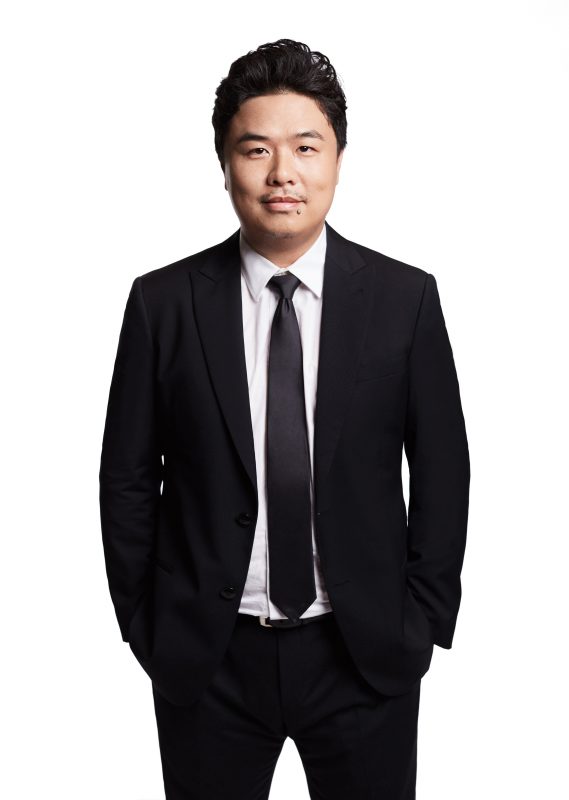 Mobile is all about snackable content. The incredible way in which short-form video platform TikTok has exploded onto the scene in the west is ample proof of that.

This same principle has seen a similar growth in the popularity of what the industry calls ‘hyper-casual’ mobile games. These are simple games, very easy to play, where each level takes only around 30 seconds to complete. Perfect for a bit of light relief while you’re on the bus home or waiting for it to arrive.

Nowhere has this growth been more evident than in China, and there are several reasons for it, as Erick Fang, CEO of Mintegral, explains.

“There has been growing concern around children and teenagers spending too much time playing what you might call ‘hardcore’ games, with multiple levels, each of which takes a long time to complete,” says Fang. “Parents are worried that this will distract them from their studies, and recently a law was introduced that says that teenagers cannot spend more than three hours a day playing online games. This naturally led to an interest in developing lighter, hyper-casual games, but the reason these have become so popular is that developers have found a way to monetise them using rewarded video and interstitial video ads. This enables them to feed their teams and creates a virtuous circle where more games are developed.”

Another reason for their popularity, says Fang, is the work culture in China. “Especially in the technology industry, people tend to work long hours to meet customer demand and company growth targets, which often leads to increasingly fragmented personal time. So even if they wanted to play the more complex games, they don’t have time. Hyper-casual games fit nicely into their lifestyle.”

“Then if you look at females specifically, traditionally, they did not play hardcore games, but many women got into gaming through a MOBA (Multiplayer Online Battle Arena) game produced by Tencent called Arena of Valor. Around 50 per cent of the people who play this game are female, and this has opened their eyes to the fact that gaming is actually fun. As a result, female gamers are increasingly drawn to mobile gaming, and hyper-casual games specifically, as hyper-casual games require less input, and the mechanism is much easier to understand.”

The final reason for the popularity of hyper-casual games, says Fang, is the kids. “The internet is very popular in China, so we want our kids to be internet-savvy from an early age, so we give them a smartphone when they are very young and they download hyper-casual games to amuse themselves.”

One important aspect of hyper-casual games is that they rely on advertising for monetisation. By definition, unlike the more complex games that are harder and take longer to complete, they are not a medium where in-app purchases come into play. So successful monetisation depends on knowing firstly how to acquire users to the app and build an audience, and secondly, how to monetise that audience through advertising. This is where Mintegral comes in, helping western developers attract users in China to their apps, and monetising them, and doing the same for Chinese developers looking the other way.

“We see ourselves as a bridge between the east and the west,” says Fang. “We are a programmatic stack. Our traffic is based on our own inventory from our SDK in games apps from leading studios like Voodoo and Lion Studio – one of only two Chinese SDKs inside their games. And we also have our programmatic traffic globally from the exchanges such as DoubleClick Unity, Tencent, and Chinese video networks. So while we definitely help western customers go east, we also help Chinese publishers go the other way too. We understand both sides.”

There are some very specific challenges for a western publisher trying to break into China, as Fang explains.

“One key challenge is to enable users to understand your game, so when they see it in the app store, is it clear how to play it, especially if the description of the game is in English. Localisation of the app store materials is very important,” says Fang. “It can also be difficult for western publishers to understand Chinese traffic sources for their user acquisition campaigns. In most western countries, it’s Facebook and Google. In China, there are four key advertising channels to acquire app users, including Tencent, with its WeChat and QQ brands; Bytedance (TikTok and Toutiao); Alibaba; and Baidu, China’s answer to Google. Between them, they account for 77 per cent of time spent online in China, and most of their systems are in Chinese since they mostly serve local advertisers. They have not expected to serve western advertisers, so they have not developed English language versions of their systems.

“Another challenge that some Android app developers might be facing in China is that software copyright and approval may be required if the developer is trying to launch Android apps with IAP (in-app purchases). There have been cases where an app without IAP was launched on China’s Android Stores, but you will need a local partner who has very close relationships with those Android Stores to assist you.”

For these reasons, Fang argues, western developers looking to crack China really need a local partner, with feet on the ground in the country.

One company Mintegral has helped break into China is Voodoo. While Mintegral plays an important part in the developer’s success in China, Fang says the key lies in taking the right approach.

“The team at Voodoo are very open and very good at trying new things,” he says. “When we talk with a lot of western developers, they do not like trying new things, but China is very different from the west; you have to have the courage to experiment.”

So much for west-to-east, what of those publishers in China looking for an audience in the west?

“It’s not easy,” Fang concedes. “If you look at the top 100-ranked apps in the US app stores, you will see only one or two from China, because Chinese game developers do not have much information on the behaviour of western users. What we advise is that they pay attention to the quality of the game itself, to give them a good foundation, and that they also pay attention to the creative and the numbers. For the hyper-casual category, interactive creative is very important, and they also need to understand how to set KPIs and calculate the ROI for each channel.”

So what do the ads in hyper-casual games look like? In the west, says Fang, most hyper-casual games use banners, rewarded video and interstitial video, while in China, native ads and Splash ads – a 4-second home screen takeover when you launch an app – are also popular. 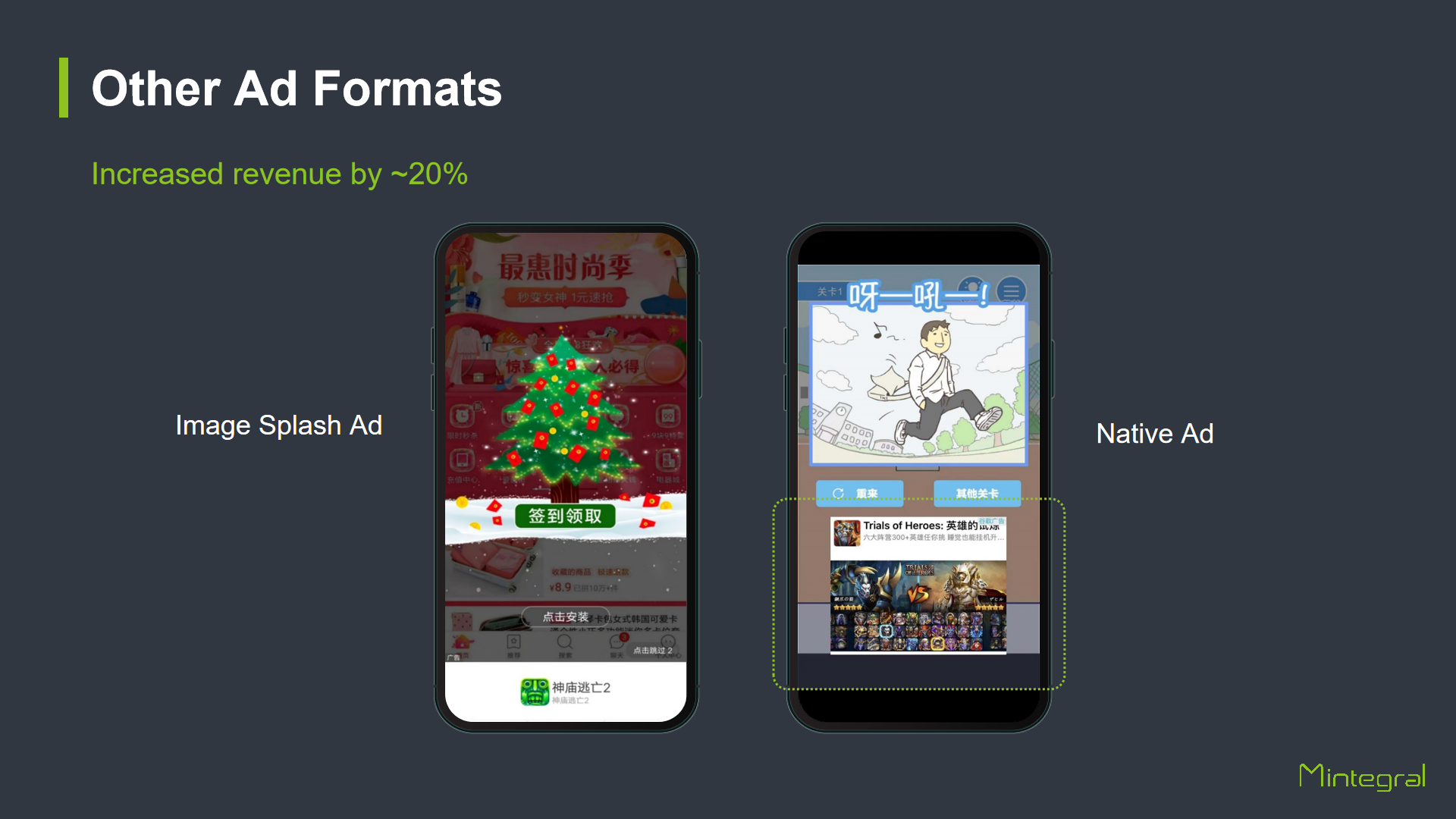 Mintegral takes the quality of the ad units very seriously, to the extent of having a sister company, Mindworks, that specialises in creating engaging, interactive ad units that will perform better and maximise the efficiency of clients’ user acquisition campaigns. Mindworks also helps the apps look their best in the app stores.

Typically, the advertisers are other app publishers, often games, but also utilities and eCommerce apps, and also brands, including FMCG, automotive and entertainment brands. Here, says Fang, the west has a lead on the east.

“The message is getting through in the western market, but in the east, the brands don’t understand the game traffic yet because they still think of games purely as the hardcore games and they don’t see those as a good place to advertise,” he says. “Our job for this year and next is to educate the brands about the appeal of hyper-casual games, the fact there are lots of female players, that this is a good audience that makes a lot of buying decisions about everyday goods and the bigger things in life like cars and mortgages.”