We are proud to announce that we have just launched a new ad format called“New Interstitial”. With the New Interstitial format, developers can configure the ad display parameters such as ad size (full screen/half screen) , display conditions, material type (image/ video) and more. This will allow for better ad placements and will help developers improve their monetization efforts while also generating a better user experience.

As a mobile advertising platform, we at Mintegral always put user experience first and we strive to build the best marketing environment for developers. The “New Interstitial” ad format coming with this latest SDK update allows developers to better manage and use ad placements and minimize negative user experience impact, based on the nature of their app and behaviour of their users. This will, in turn, lead to better user engagement towards the ads displayed.

After integrating the new versions of the Mintegral SDK (iOS SDK7.1.0 / Android SDK16.0.1 and above), developers can create an ad placement with the New Interstitial format in the dashboard and set its ad size and material type there.

2) Multiple material types can be selected:

How to use the Developer Dashboard

Once developers have integrated the new version of SDK, the “New Interstitial” feature will be available.

Step 1: Once developers have integrated the new version of SDK, the “New Interstitial” feature will be available. Log in to the dashboard, select “Placement & Unit” – “Add Placement”: 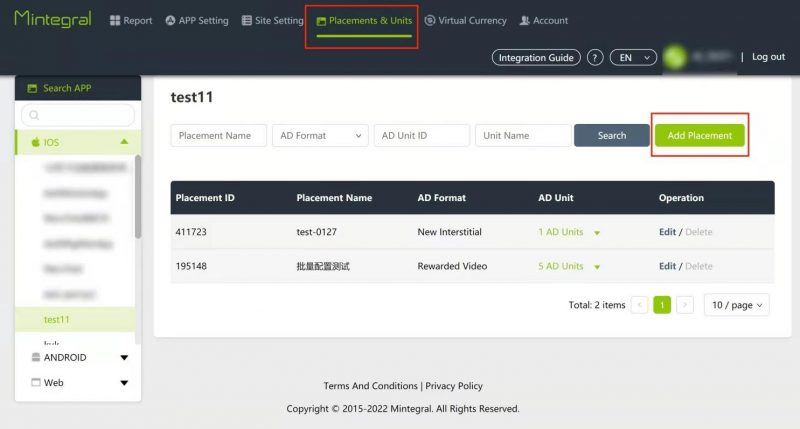 Step 4: The newly created “New Interstitial” ad placement will appear in the dashboard: