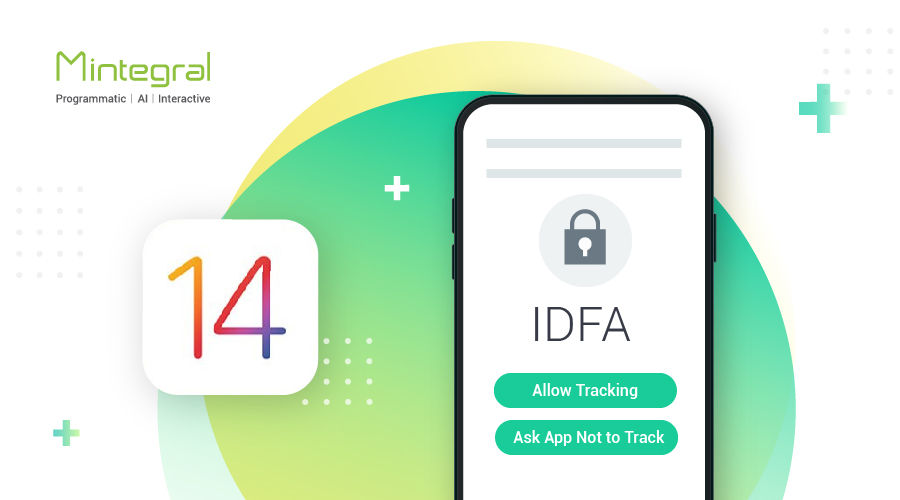 iOS 14.5 Is Coming: Getting Ready for a Post-IDFA World

The launch of iOS 14.5 is around the corner and with it come significant changes to privacy and ad tracking. Let's take a look at what this means for the industry and what you need to do to find success in a post-IDFA world.

Unless you’ve been ignoring any of the mobile industry media for the past six months, you’ll know that Apple’s decision to limit the use of IDFA is the biggest change to the mobile advertising landscape we have seen for some time.

With Apple’s next update due on the 26th of April, we are now only days away from the launch of iOS 14.5 and with it the changes to privacy and ad tracking that has created so much discussion and uncertainty. In this post, we’ll run through the essential information that advertisers and publishers using Mintegral need to know.

An IDFA (Identifier for Advertisers) is a unique identifier for mobile devices and is used to target and measure the effectiveness of advertising on a user level across mobile devices. It’s unique to Apple iOS devices; Android uses something similar, called Android Advertising IDentifier or AAID.

For some time now, Apple has prioritised the privacy of user’s data. This latest move is designed to give users more ability to opt-out of any type of advertising that uses targeting or tracking. The change will be global, as it will be included in the latest iOS version, iOS 14.5.

Apple isn’t restricting the collection of IDFA data completely; instead, it will ask users to actively opt-in to be tracked by apps. Currently, users can opt-out of ad tracking, but the option is hard to find and not app-specific. Anyone using iOS 14.5 or above will see a prompt to opt-in or opt-out of tracking for each app that wants to collect their IDFA.

Currently, about 70% of IOS users share their IDFA with app publishers. Although nobody knows what will happen once users are asked to actively opt-in to tracking, it’s estimated that this number will drop to 10% to 15%.

As an alternative, Apple is promoting its own solution called SKAdNetwork (SKAN). This is Apple’s privacy-friendly way to attribute impressions and clicks to app installs on iOS apps.

SKAN shares conversion data with advertisers without revealing any user-level or device-level data – meaning that the kind of granular tracking currently available won’t be possible. It’s this sudden removal of conventional that has so many advertisers and app publishers worried, as it’s a step into the unknown.

What does the change to IDFA mean for advertisers?

The first impact is that major platforms (Facebook, Google, Snapchat, TikTok, DSPs, MMPs, etc.) will have to provide support for Apple’s SKAdNetwork framework. It will inevitably fall to the advertising platforms to educate advertisers and publishers about the short and longer-term changes to the advertising ecosystem as a result.

SKAD works by recording attribution parameters when an ad is clicked, sending an install postback, including information like the campaign ID back to the ad network when an app is opened for the first time.

However, because Apple aggregates this attribution data before it’s shared with ad networks and advertisers, there won’t be nearly the same level of insight into the campaign’s performance. This also means that real-time campaign optimisation and performance marketing becomes much more difficult because of the lack of data on how well ads have performed. This means that advertisers will need to work with their ad network and MMPs if they want to access this event-level data.

Not only that but there will no longer be a way to link the attribution data with data from the app and the MMP, as this approach relies on the IDFA or user ID to connect all the different attribution actions. Apart from making mobile advertising less transparent, advertisers will become much more challenging to measure their Return on Ad Spend (ROAS).

What does the change to IDFA mean for publishers?

For any publisher with an iOS app, the changes to IDFA will have a major impact. CPMs will almost certainly drop dramatically as advertisers reduce their spending in order to gauge the impact on the ad platforms they use.

More importantly, their apps will be rejected by Apple if the attribution or monetization partners they work with try to implement workarounds that collect user-level data.

To make sure you are compliant, complete these simple steps:

Starting from iOS 14.5, publishers will have to implement Apple’s App Tracking Transparency (ATT) framework to request consent for tracking any user data. Some developers are currently running ATT prompt tests to establish opt-in baselines and to optimize pre-prompt designs.

To protect their existing app revenues, publishers should also update the metadata in their apps to better support SKAN. Going forward, publishers will need to include the SKAdNetwork IDs of every ad network they are working with so that Apple can authorise sharing its attribution data with them. If this information is missing, there will be no way to tell where or when the click or install happened.

What Mintegral is doing to prepare for iOS 14.5

If you are already a Mintegral customer, the most important thing to know is that Mintegral’s SDK already supports Apple’s SkAdNetwork 2.0, and is fully compliant with Apple’s latest privacy policy. Any publishers with the Mintegral SDK installed just need to ensure they are using version 6.6.0 and above.

In addition, we recommend advertisers explore media buying strategies on non-IDFA traffic or LAT (Limit Ad Track). As one of the very few independent third-party platforms with a large volume of privacy-friendly and non-IDFA historic data, Mintegral already uses machine learning to build ad targeting models that don’t rely on the kind of 3rd party tracking which Apple’s changes will block. That’s why we believe our unbiased and proprietary data can help our advertisers to continue to thrive under the new scenario.

We’ve also continued to work to improve the effectiveness of our platform more generally. To this end, we have created Playturbo, our newest tool which lets publishers quickly and easily create their own high-performing playable ads. Playturbo also tests the creative, automating the process of iterating and improving the ad until it has the best possible response rate.

It’s worth remembering that regardless of the disruption that may or may not follow Apple’s changes, the importance of great ad creative remains unchanged. High quality, engaging ads will always deliver better results than poor ones.

What is the next change after IDFA?

Limiting the use of IDFA is really just another step in advertising’s evolution toward a more transparent and sustainable future.

At Mintegral, we believe the next big change will be in how in-app bidding is done. Advertisers will continue to migrate from traditional waterfall set-ups and instead seek out fairer and more transparent in-app bidding models. We are also seeing ad networks investing in ways to use more contextual data to incorporate their audience targeting, so they become less reliant on the kind of targeting that led to such reliance on IDFA.

In the long term, the biggest change will be a move to in-app bidding rather than the centralised, less-than-transparent programmatic model we’ve seen in recent years. Such a move will help advertisers and publishers increase efficiency, reduce the percentage of ad budgets taken by middlemen, and foster much greater transparency.

Are you ready for IDFA?

We’ve put together a simple checklist of actions you need to take to be ready for the change to IDFA:

Jingyuan Wang is a Senior Product Manager at Mintegral, bringing with him over 7 years of product strategy and optimization experience. Jingyuan is responsible for the Mintegral SDK project, with a goal to provide premium monetization solutions for developers around the world.
Share