Alison Bilas, COO at JoyPac, took to the stage earlier in August at the Mintegral Bridge Summit to talk about the rise of the hyper-casual genre in China. How does this trend look like in the East and what should western developers know before launching their apps on the Chinese market? Let’s find out!

JoyPac has an impressive track record in China, having already launched 10 games there so far this year. COO Alison Bilas was present at The Bridge Summit hosted by Mintegral and PocketGamer.biz to share her key findings around the Chinese market. Launching in this market can be a bit tricky, so what should Western developers keep in mind before taking their apps East?

The rise of hyper-casual games

Hyper-casual games are a relatively new genre, compared to the rest of the gaming industry which was up until not long ago made of three categories: core, mid-core and casual. The rise of this new genre happened extremely quickly and naturally, particularly as mobile advertising matured and monetization became more competitive. From just a handful to over 100 hyper-casual titles launched in 2018.
Image source: JoyPac presentation @ The Bridge Summit, Cologne 2019

A couple of key stats stood out to us:

This means that the other 22% only play hyper-casuals. JoyPac COO Allison Bilas said “This really is expanding the pie of players as a whole. Players who weren’t engaging with IAP games are now engaging with hyper-casual games because of this quick gameplay they’re able to engage in.”

Why is this? According to Bilas, it’s because they have very limited time for games: “They play while they’re waiting or multitasking, so the short play sessions of hyper-casual games are very appealing and there’s a lot of market demand for them.”

Hyper-casual phenomenon growing in the East

Traditionally, core genres like MMO-RPG, MOBA, RTS, and CCG/TCG have dominated the top charts in China. The main reason is that unlike the West, Chinese players didn’t have access to Facebook or game consoles (both banned), so they had to move to PC gaming.

“Consoles were banned in China, so gamers flocked to PC where F2P monetization mechanics flourished. The trend of hyper-casual in China has been slower to catch on because of this history,” said Bilas.

Typical transition in the West 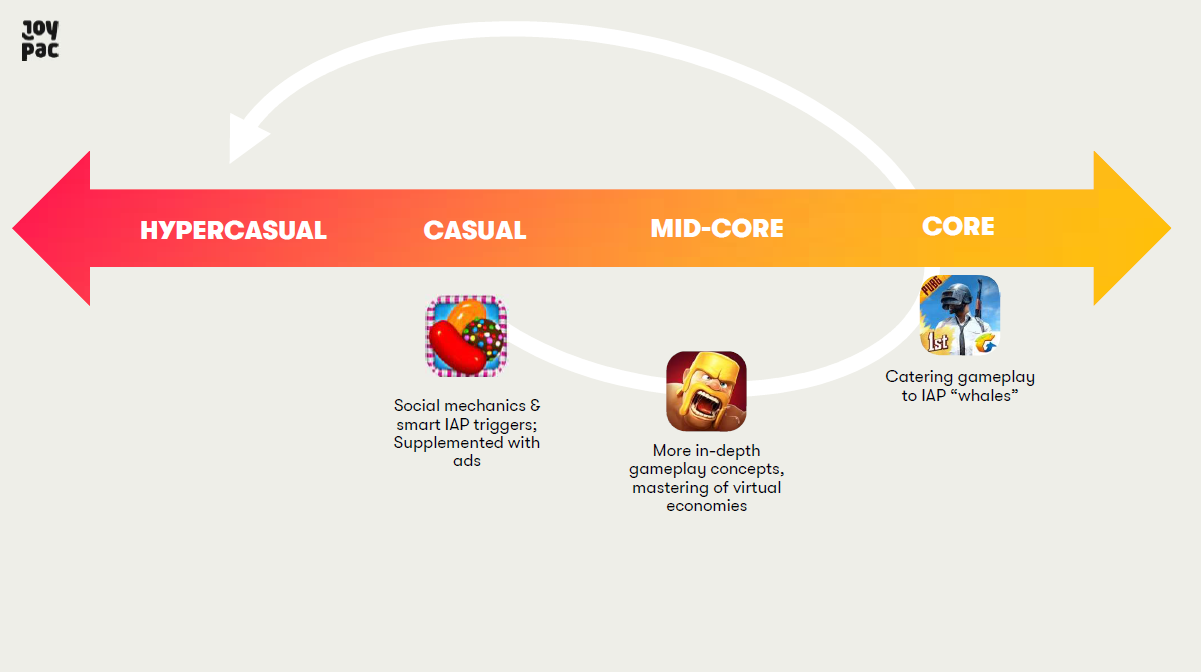 That said, more and more hyper-casual games have taken the Chinese App Store charts by storm lately. According to Bilas, around half of the top 10 downloads in China are hyper-casual, while the Western charts have most, if not all, of the top 10 places taken by this genre.

Challenges to launching in China

It wasn’t just the absence of Facebook games or consoles that slowed the hyper-casual adoption in China, there were several other reasons, some of which still persist:

The hyper-casual business model is all about buying players at the lowest cost possible and monetizing them at scale with ads. According to Bilas, the Chinese ad ecosystem was playing catch-up with its Western counterpart up until recently; she said: “At this point, eCPM and CPI levels in China mirror those that we see in the West, particularly on iOS.”

Last year, the Chinese government stopped issuing licenses for 9 months, which had a significant impact on the industry as a whole. Regulation so far is largely around IAP, so hyper-casual games are a little safer from scrutiny, but as regulations are still defined, hyper-casuals could be targeted in the future.

Unlike the West where you have one app store for Android devices, the Chinese market has over 15 Android app stores. These stores are owned by large tech companies like Tencent, Huawei, Xiaomi, or Baidu. This makes the battle for market share more difficult as developers need to consider multiple app stores, each with its own set of processes and workflows. 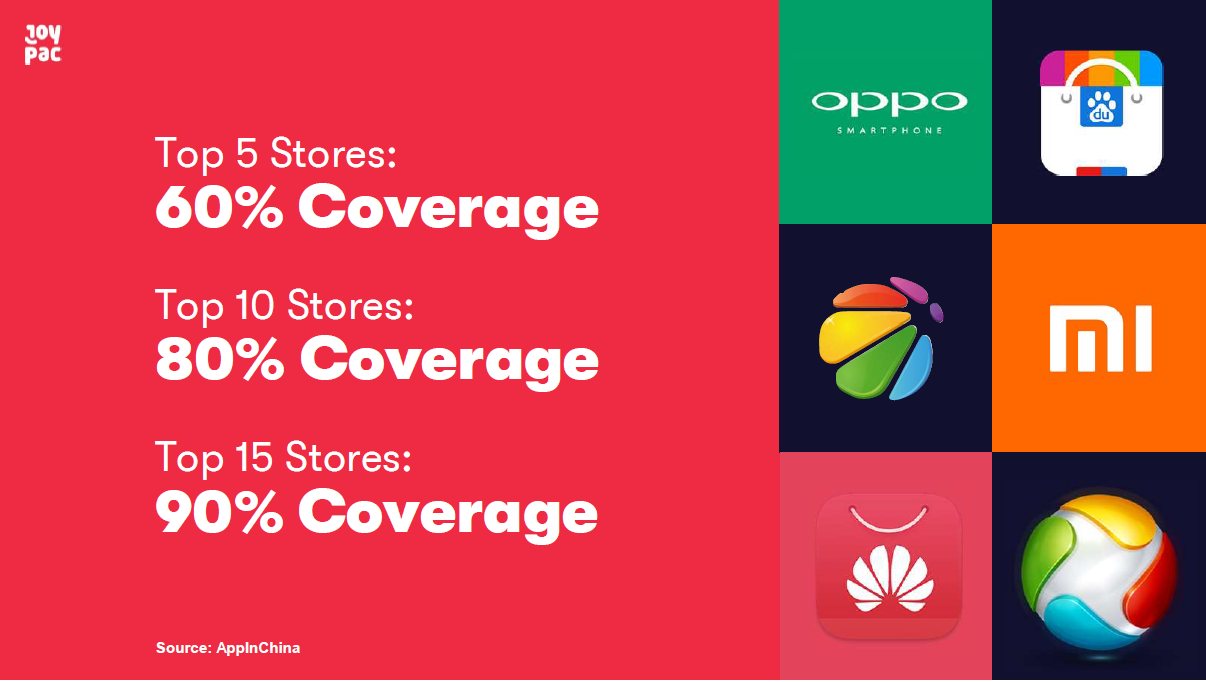 But every challenge has its reward and the challenges tied to launching in China come with a massive opportunity: a mobile-first market of over 800 million users. To put things in perspective, there are 242 million iOS devices in China – that’s more than the combined iOS & Android devices in the United States! And with mobile phones much more integrated into Chinese people’s lives, more time spent on the phone means more time spent playing as well. 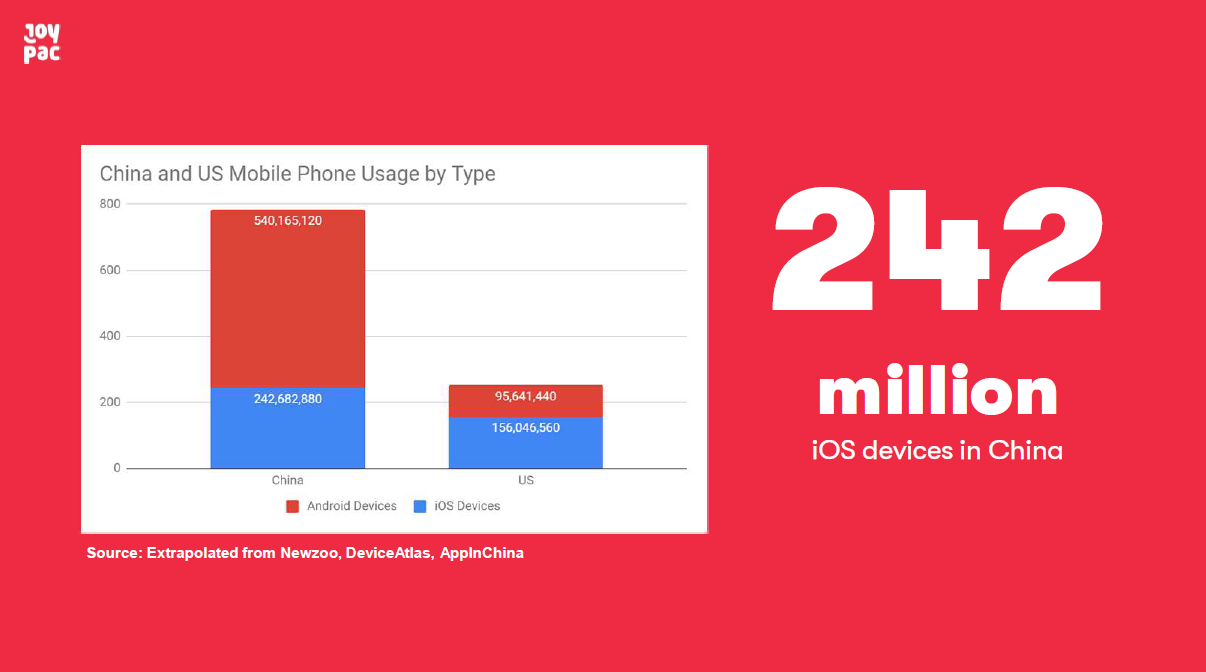 Lessons learned from launching in China

JoyPac has launched 30 games, totaling over 35 million downloads so far this year. 4 of those games made it to the Top 50 downloads charts, and 1 game even made it to Top 3. So what have they learned?

Localization, while relatively minimal compared to other game types, is still quite important. For example, changing characters for the Lunar New Year. Modifying elements like content, colors, and tone of voice is also important and will have a significant impact on UA.

According to JoyPac, themes like self-deprecating humor and awkward scenarios seem to work really well in China. Games like Skip School give players a sense of nostalgia and fantasy and these games tend to be shared very easily on Chinese social media channels like TikTok.

Day 1 retention is over-used in the industry, according to Bilas, as that number doesn’t really tell you how much money you’ll make – this is where Day 7 retention comes in. The lift developers see when they increase D7 retention by 1% (e.g. from 10% to 11%) is 10 times more than increasing D1 retention by the same amount. This is particularly important for hyper-casual games, where margins are very small. Her advice? Get D1 above the 40% benchmark, then focus on optimizing your D7.

Chinese players tend to have a higher threshold for seeing ads. They tolerate and engage with ads more than Western players, which introduces enhanced monetization capabilities. Rewarded videos are particularly appealing to all players, but Chinese players are also willing to have ads splashed.

The hyper-casual market in the West is massive, but the key to success now lies in the East, particularly in China, the world’s largest mobile market. While that doesn’t come without challenges, the opportunities are tremendous and ignoring them is not a feasible long term solution.

Success in the East also means finding the right partner who can help you navigate the Chinese regulatory and licensing ecosystem, so if you’re looking to launch your app in the Chinese market, we’d love to hear from you.